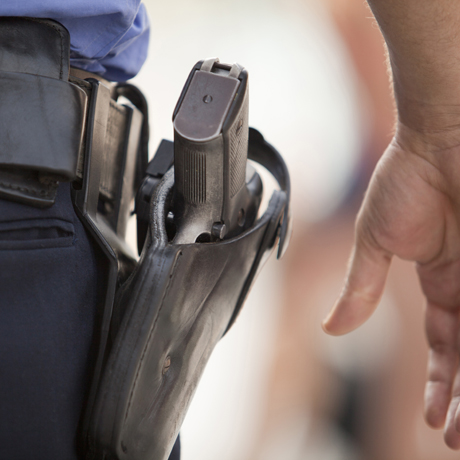 Two leading Supreme Court cases set the governing standards for appropriate use of force by police. These are Graham v. Connor and Tennessee v. Garner.

[T]he reasonableness of a particular use of force must be judged from the perspective of a reasonable officer on the scene, rather than with the 20/20 vision of hind sight.
The calculus of reasonableness must embody allowance for the fact that police officers are often forced to make split-second judgments – in circumstances that are tense, uncertain, and rapidly evolving – about the amount of force that is necessary in a particular situation ….
[T]he test of reasonableness under the Fourth Amendment is not capable of precise definition or mechanical application, however, its proper application requires careful attention to the facts and circumstances of each particular case, including, the severity of the crime at issue, whether the suspect poses an immediate threat to the safety of the officers or others, and whether he is actively resisting arrest or attempting to evade arrest by flight.

The Graham Court further explained how an officer’s intentions are irrelevant to the question of whether use of force was reasonable or unreasonable.

In Tennessee v. Garner, 471 U.S. 1 (1985), the Supreme Court considered police use of force against fleeing felons. The Court stated that determining the reasonableness of police uses of force requires balancing an individual’s interests against those of the government by looking at the “totality of the circumstances.” The Court explained:

[I]f the suspect threatens the officer with a weapon or there is probable cause to believe that he has committed a crime involving the infliction or threatened infliction of serious physical harm, deadly force may be used if necessary to prevent escape….

This principle means that, in situations involving fleeing suspected felons, the Court recognizes a “probable cause” standard, meaning that where officers have probable cause to believe that the suspect poses a significant threat or death or serious physical injury to the officers or others, officers may justifiably shoot a fleeing suspect.

ACLU, Know Your Rights: What To Do if You’re Stopped by Police, Immigration Agents or the FBI (2017), https://www.aclu.org/know-your-rights/what-do-if-youre-stopped-police-immigration-agents-or-fbi.

National Institute of Justice, Police Use of Force (Nov. 29, 2016), https://nij.gov/topics/law-enforcement/officer-safety/use-of-force/Pages/welcome.aspx.

Police Foundation, When Can the Police Use Force – and What Happens When They Do? (2016), https://www.policefoundation.org/general-resources/use-of-force-infographic/.