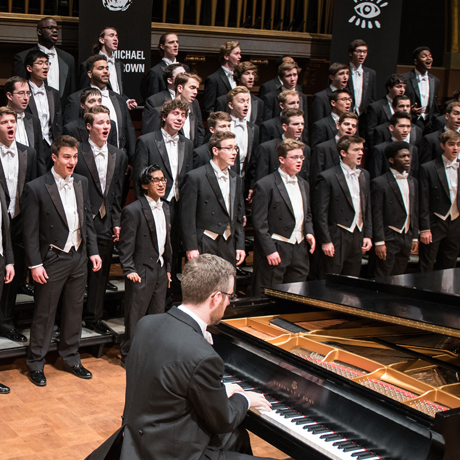 Founded in 1859, The University of Michigan Men’s Glee Club is one of the oldest collegiate choruses in the United States and long acclaimed as one of the finest male choruses in the world. The Glee Club is known for its wide repertoire of music that incorporates selections from different musical styles and periods including Renaissance motets, Romantic anthems, opera choruses, folksongs, spirituals, contemporary works, and, of course, Michigan songs. Since the beginning of Dr. Rogers’ tenure in 2011, the club has premiered over twenty new arrangements and compositions.

In 1959, Michigan Men’s Glee Club was the first American male chorus to win the International Musical Eisteddfod in Llangollen, Wales, (and has since won three more first prizes at the same competition), and in 1967, circled the globe in celebration of the University’s sesquicentennial year. Recent international tours have included Southeast Asia (1989), Eastern and Central Europe (1992), South America (1996), Australia (2000), the British Isles (2004), Spain (2008), Cuba (2011), China (2012), and South Africa (2016). The Club has made appearances at Avery Fisher and Alice Tully Halls at Lincoln Center in New York, the Kennedy Center in Washington DC, and the pre-game festivities for the 1984 World Series. Other notable appearances include the 1986 and the 2004 IMC National Seminar at Harvard University, the American Choral Directors Association Central Division Conventions in 1992, 2000, 2010, and the ACDA National Convention in San Diego in 1997. The Club was also honored to be featured on Mannheim Steamroller’s double platinum CD Christmas Extraordinaire in 2001. Recently, they gave two performances at the esteemed National American Choral Directors Conference in Salt Lake City, Utah (2015) and appeared at the Intercollegiate Men’s Choruses National Seminar at the University of Illinois (2016).

In 2016, the Michigan Men’s Glee Club recorded and premiered their documentary film, “Love, Life & Loss.” This film documents the Club’s performance of “Seven Last Words of the Unarmed,” a multi-movement work by Joel Thompson commemorating the lives of African American men lost at the hands of authority figures, and John Legend’s “Glory” from the motion picture, Selma. The film was featured in a broadcast on Detroit Public Television, and has been submitted to film festivals worldwide for screenings in the coming months.

The scope of the Men’s Glee Club reaches far beyond rehearsals and performances; the Club is a vibrant social organization with a national outreach program to diverse communities called “Brothers in Song.” Partnering with such organizations as Detroit School of Arts, Chicago Children’s Choir, Duke Ellington School of the Arts and others. In addition, the group frequently collaborates with Glee Clubs around the nation such as Michigan State, Cornell, Ohio State, Notre Dame, Rutgers, Miami of Ohio, Harvard, and Yale Glee Clubs. The graduate and undergraduate members of the Glee Club represent many diverse fields of study in the majority of the University’s 19 schools and colleges, and its student officers are responsible for the management of all non-musical Glee Club operations. The Friars, an eight-member a cappella subset of the Glee Club, are in their 61st year and serve as an extension of Club as they maintain an ambitious performing schedule.